Halley Movement with the technical support of its specialised team has been producing materials since 1990. The materials meant mainly for awareness purposes have been successful all way throughout in providing useful information to parents, children, caregivers, decision makers and families on different issues pertaining to child welfare. 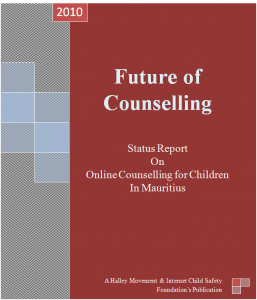 ‘Future of Counselling’is another publication of Halley Movement & Internet Child Safety Foundation. This status report aims at enlightening all stakeholders involved in child protection to think towards new trends in counselling.

Halley Movement wishes to reach out to children and young people through modern means of telecommunications, which are text messaging, email and internet chat rooms.

Previous studies have shown that children and young people keep themselves abreast to new means of communication.

‘Child Abuse- A Shared Community Concern’ is the first of a series of community awareness materials produced in 1991. The booklet has two important goals.

Firstly, it encourages people to discuss the issue openly and break the silence protecting those who commit the crime.

The second goal which depends very much on the success of the first, is to create a climate in which the child victims of abuse feel safer about coming forward for help without being blamed or disbelieved.

The need for this booklet was felt after the publication of the report on ‘Empowerment of Elderly in improving child welfare’. This booklet produced in french gives a brief insight of the Intergenerational process towards integration of all generations for harmonious human relationship.

A poster has also been designed to accompany the ‘Livret sur l’intergeneration’ so that it can reach a wider audience.

Halley Movement studied the ways of involving the Elderly into child care in Mauritius and Rodrigues. The result of the study is a report that is based on views collected through a participatory process involving citizens aged between 50 to over 70 years old, from different income groups in both rural and urban communities.

The report gives an insight into these communities’ views on child care, some causes of child abuse, the effects of abuse on the lives of children and some strategies on how the elderly may help to alleviate child abuse and also improve child and family welfare.

In light with the growing cases of child abuse, Halley Movement designed and published a poster to help in its fight against child abuse in Mauritius and Indian Ocean Island.

A copy of the poster was distributed to community places, families and schools to raise awareness of the problem.

The status of Education in the South of the Country

Halley Movement conducted a research to determine the current level of education in regions in the south of the country. These regions were Batimarais, Benares, Bel Air, Saint Aubin Tyack and Rivieres Des Anguilles.

Questionnaires were designed, volunteers were trained, interviews were carried out and the results were analysed. Among the major issues that came to light were that children in these regions tend to drop out of school after failing the primary education.

It was also found that once they are out of school, they are deprived of basic education and start looking for work. Halley Movement studied ways of involving drop outs into informal teaching.