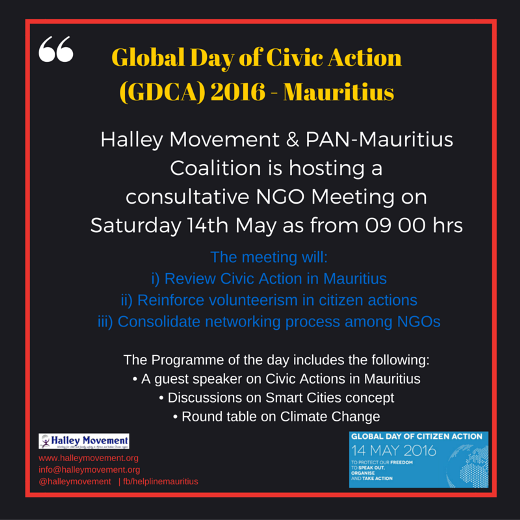 The event will gather partners and resource persons involved in the various community based programmes of our organisation.
i) Reviewing Civic Action in Mauritius
ii) Reinforcing volunteerism in citizen actions
iii) To consolidate our networking process

The workshop grouped NGO representatives from Halley Movement’s partner organisations and the launch Ceremony was done by H.E. Dr N Nokwe, High Commissioner of South Africa. H.E. Dr. N. Nokwe who spoke about the importance of citizen actions in the World and in particular in Mauritius which is to get people think about civic space, understand their rights, increase awareness about the importance of civic space and our needs to mobilise and engage.

Her launch address was preceded by a video projection showing civic space and action in the world.

During his welcome address the Secretary-General of Halley Movement pointed out that The Global Day of Citizen Action is a global event which took place on Saturday, 16th May where ordinary citizens told whether they feel free to speak out, organise and take action. By participating to the Day, everybody is helping to understand what’s happening in our country and this will help create awareness about the importance of `civic space’. He also added that civic space exists when individuals and organisations have the freedom to speak out, organise and take action. In other words, to freely express, associate and assemble like we are doing today.

a) Indiscipline and violence at schools, and
b) Child Safety on Internet.