A meeting was held in Mauritius with all stakeholders and was chaired by Foreign Affairs Minister. Halley Movement was invited to that meeting. A high level delegation led by the Hon. Minister will proceed to Geneva for the review.

Halley Movement’s report to the UPR has been based on the fact that DCI-Mauritius and its partner organisations advocate for children’s rights in Mauritius. DCI-Mauritius scrutinises the work of the different ministries and where appropriate makes statement in that respect. An online counselling service has been running since 2012 and Halley Movement has been working in the field of child protection since 1989. The online counselling service has allowed DCI-Mauritius to understand the behaviour of children and to register breach of the UN Convention on the Rights of the Child.

In the report submitted by DCI-Mauritius a variety of issues pertaining to children’s rights has been thoroughly dealt with and they include the following among others: 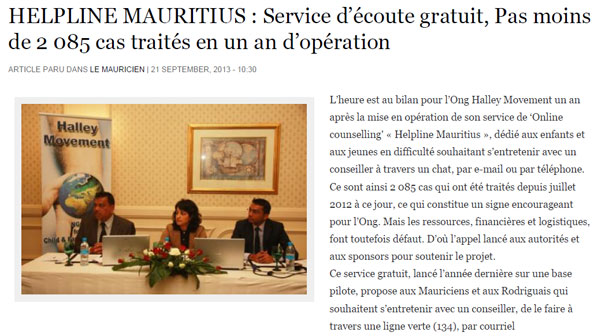